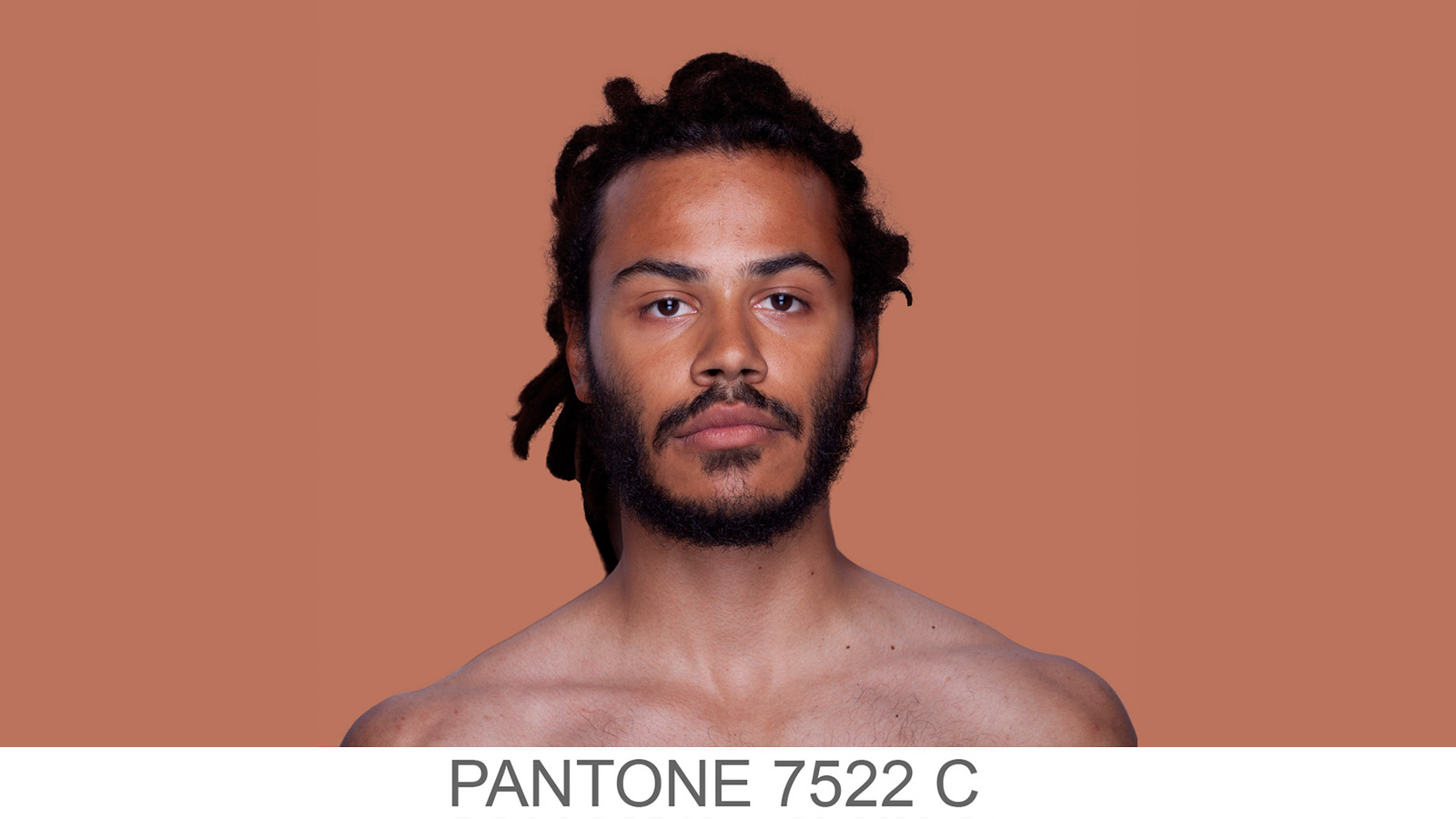 PANTONE® is a classification system which assigns an alphanumeric code to an immense spectrum of hues and values. For decades it’s been the technical standard to accurately communicate about color in a number of industries, including architecture, design, fashion, and publishing. Dass began the ongoing series to initiate a dialogue on skin tone and the social construct of race; she told writer Carren Jao:

Humanae is a chromatic inventory

Though we often self-identify with a single word to describe our skin tone — like ‘black’ and ‘white’ in the US, or moreno/morena in Brazil — in reality, every face reveals a personal rainbow.

There’s no practical way to address this complexity, so Dass uses her own shorthand: she samples an 11×11 pixel patch from each portrait and calibrates it. That representative color is then placed in the background (and labelled as in the actual PANTONE® Guide). To see the project’s richness, check out Humanae on Tumblr — which Dass updates regularly with new portraits.

The majority of early subjects were from Madrid, Spain, where the artist currently lives and works. However, she intends to travel more in order to deepen the diversity of the project. For example, earlier this month, Dass shot new photos in Paris. In her words:

Humanae is a chromatic inventory — a project that reflects on the colors beyond the borders of our codes.

It’s valuable to reflect upon what our ‘codes’ may be with regards to skin color. Besides the simple, unadorned frankness of each portrait, Dass invites a deeper discussion about human culture and the importance that racial identity plays within it. What is a mask that we wear? How is it demanded by society, and what aspect is self-imposed? Ultimately, what is our true identity?

Angélica Dass
Photographer
Angélica Dass was born in Rio de Janeiro, Brazil, in 1979 and received a Bachelor of Fine Arts from the Federal University of Rio de Janeiro. She's worked in the fashion industry, as well as studying photography in Spain at the EFTI Photography School. Currently, Dass lives and works in Madrid. She created the Humanae project, an ongoing series of portraits of everyday people. Her goal is to document all possible skin tones -- calibrating them to the PANTONE® Color Guide. Her work is represented by Max Estrella Gallery.

Darkened Cities: Thierry Cohen Reveals the Stars over Rio
Like this article? Leave a comment, or subscribe to our newsletter for more fresh from Brazil.
Category: Culture / Topics: Art, Cariocas, Photography

Fredrick is the founder and editor of Brazigzag, an inside guide to the diverse and enchanting culture of Brazil. A writer and artist, he also teaches yoga. Follow him: @fredrickhaugen